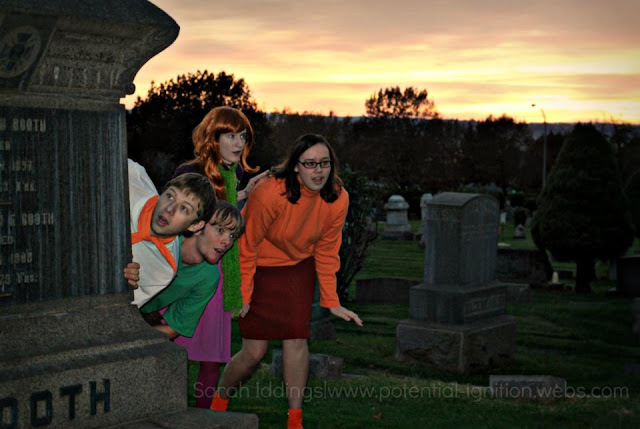 Tip: Get a remote shutter-release for your camera; makes it SO much easier to get group photos with you in them! They run around $13 on Amazon.com, last I checked.


Ever seen that show, "Scooby-Doo" or any of it's movies? Somewhere along the lines, there would always be a scene where the whole gang of teens that make up Mystery Inc. are running down some long pathway or corridor to escape a monster. Don't you wish you could do that with life's "monsters"? Just run away from problems? Sounds pretty good to me. The fact is, that's not an option. We will always be faced with some "monster", and we will have to work our way past it.

Each character of the foursome (or five, if you include their dog, Scooby), has their own reaction to monsters.

Velma: Takes the logical approach; researches the monster, learns it's weakness, and attempts to find a way to defeat or unmask it.

Shaggy (and Scooby): Acknowledges that there are definitely monsters, and when one appears, freaks out and runs away screaming louder than anyone.

Daphne: Often takes Fred's approach in denying the existence of monsters; when one appears, she attempts to escape it, but ends up getting caught and has to be rescued by others.

Compare these reactions to yourself- which are you most similar to? I often find myself like Daphne- getting totally caught up in life's problems and often having to be pulled away from them by the people God has placed around me. Out of all of these, you're probably the best off if you are like Velma, but what does the Bible have to say about fear? Rely on the Lord.

Be strong and courageous. Do not be afraid or terrified because of them, for the Lord your God goes with you; he will never leave you nor forsake you. (Deuteronomy 31:6)