Advice: Candid shots at events can be really fun! Get a camera with a good zoom (or a good zoom lens!) and hide out in the crowd, taking shots from a distance where you will not be noticed.


When Christians share the Gospel with people, often times they will get some rather unflattering looks; particularly from those who are known to be great scholars by the world's standards. Fortunately, despite the popular saying about "If looks could kill, I'd be dead", God does not seem to have ordained that any of His people be killed by a disdainful expression. At least, I have not heard of an instance where this has happened.

So why do so many people feel nervous to share the message proclaimed in the Bible? For those of us who live in America, where so far we still have the freedom to speak of Christ without being killed or physically harmed (in most cases), likely all we will receive are disagreeable words and expressions, or at worst, no longer be spoken to by the individual again. Isn't it a small chance to take when their lives are at stake?

Some may say that it seems a little over dramatic to say one's life is at stake just because they do not believe the Bible, especially when they can see no visible danger posed toward them. But here is the thing about dangers- it's the invisible ones you REALLY have to be worried about. If some one knew there was a deranged killer in the back seat of your car, wouldn't you want them to tell you? And to the one who knows about the killer- wouldn't you be doing a tremendous disservice to some one by leaving them to be killed without warning? Would you hold back giving them such important information just because you'd be afraid they might call you an idiot or become angry at you because they perceive your message as a waste of their time?


"Because of the service by which you have proved yourselves, others will praise God for the obedience that accompanies your confession of the gospel of Christ, and for your generosity in sharing with them and with everyone else." -2 Corinthians 9:13

"But the day of the Lord will come as a thief in the night, in which the heavens will pass away with a great noise, and the elements will melt with fervent heat; both the earth and the works that are in it will be burned up. Therefore, since all these things will be dissolved, what manner of persons ought you to be in holy conduct and godliness, looking for and hastening the coming of the day of God..."
- 2 Peter 3:10-12a

Well, I really wanted to post something meaningful for you guys to read today, but somehow I'm very brain dead! It's odd, cause I have taken a bunch of new photos this week, as well as had the pleasure of attending some really great sermons, yet nothing is clicking for a blog post. I guess all I can say is sometimes God answers my prayer for inspiration with a "yes!" and sometimes with "not today, Sarah". Whether He gives me something to write or not, either way, may the Lord's will be done. 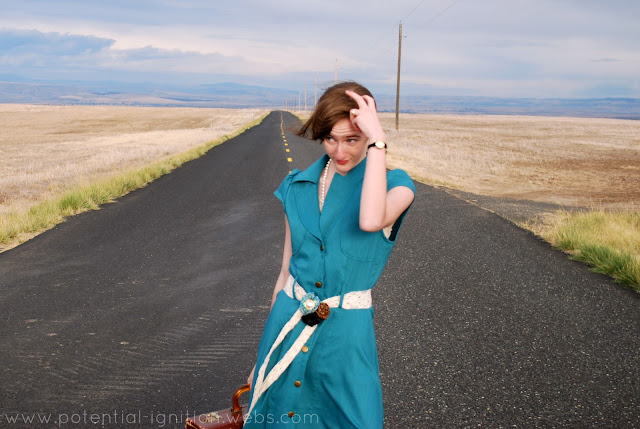 Advice: When ever possible, do a portrait shoot on a day with storm clouds- it provides terrific lighting on your subject without distracting shadows!

Also on a side note, this is a totally candid shot of me taken by Zachary R. I was trying to hold my hair down because there was a very strong wind blowing, but I thought it made for a good "Brain Dead" picture :) 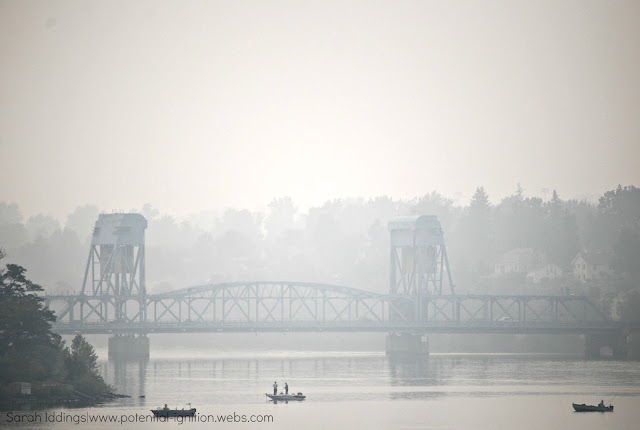 No Flash.
Advice: Don't always run on auto! For this shot, I had to do a LOT of experimenting with manual exposure for the lighting, as well as messing around with the manual focus- autofocus refused to allow the bridge to show up!

For quite some time we've been plagued with massive clouds of smoke where I live. Yeah, that's right, that isn't fog in this photograph! The day I took it, we had barely over a mile viability. Then on Friday (after 83 days of dry weather) we finally got some rain! Hooray! The veil of smoke is now gone, and we can enjoy fresh air and take in the lovely fall colors that have been rapidly appearing.

Looking at this picture, I think of how in the Bible things were spoken of as being "veiled". When the rain came, our veil of smoke was lifted, the beautiful fall colors could be seen & we could regain our liberty to breathe outdoors. Likewise, when we turn to the Lord, it is as if a veil is lifted from our line of sight. We begin to see the glory of God, notice His hand in the happenings of the world, and we become liberated from the bondage of sin! (That however is not to say we will never sin while still on this earth, but that we are no longer slaves to sinful desires).


"The creation itself also will be delivered from the bondage of corruption into the glorious liberty of the children of God." - Romans 8:21
Posted by Sarah at 3:52 PM No comments: 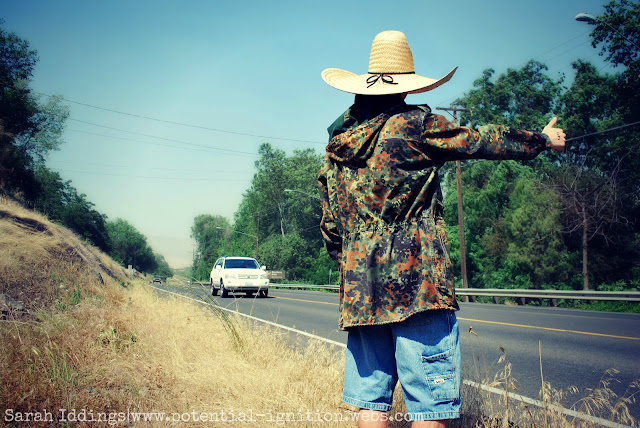 No Flash.
It's pretty easy to get big ideas. My friends and I get them all the time- sure, they seem great at the time, but you never can tell just how they will end. Making a spur-of-the-moment movie sounds great until you are running down the road bathing in your own sweat on a 100 degree day. Or what about that road trip that starts out to be terrific fun, but ends with you stuck on the side of the road for two hours?

Making plans can be a great thing, but we have to be careful not to get too stuck on them, for they don't always turn out the way we think they will. Sometimes they do not even turn out at all- just ask all those people who have planned beach trips only to discover it's pouring down rain the next day! Just goes to show, as much as we would LOVE to be completely in charge of what happens in our lives, we cannot have total control.

But guess what? It doesn't mean there is no order to the seeming craziness that happens in life and the universe. God is still in control, and for those who live their lives to Him, they will someday get to see the big picture of why things happen the way they do, and know that all works out just the way He means it to in the end.


"Now listen, you who say, “Today or tomorrow we will go to this or that city, spend a year there, carry on business and make money.” Why, you do not even know what will happen tomorrow. What is your life? You are a mist that appears for a little while and then vanishes. Instead, you ought to say, “If it is the Lord’s will, we will live and do this or that.” "- James 4:13-15
Posted by Sarah at 3:46 PM No comments: