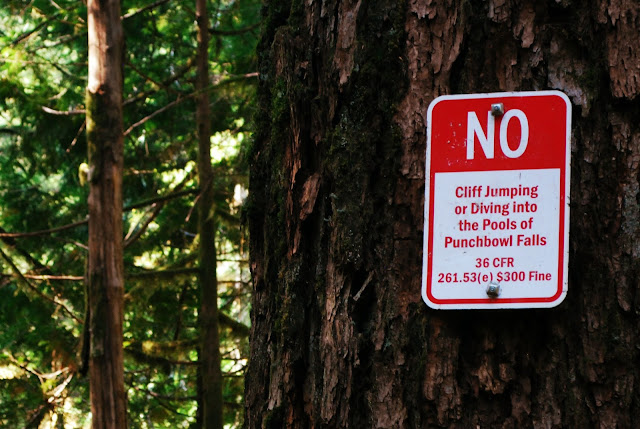 Tip: Don't always center everything. Play with the rule of thirds and try different positioning to add more interest and depth to your photograph.

I went hiking a couple weeks ago and along the way my friends and I stumbled upon this sign. "So, I wonder if the $300 is a flat rate for as many jumps as you can do in a day or if it is $300 per jump?" one of us asked. We all had a good laugh, then watched as one of the people near the water fall hurled himself into the water. "There goes his $300."

Lets face it: we all want to bend or break the rules from time to time. Sometimes it takes a conscious effort to not act like a rebel. Sometimes there are obvious consequences, sometimes we discover the downside of our actions later on. But rest assured, there is always a repercussion to what we do, whether we see it immediately or not.

Take for instance the many times the Bible commands us to honor God (Matt 22:37, Deut. 6:5, Psalm 86:12, to name a few). Sometimes we think we can bend that a little- perhaps just do the motions of worshiping Him, all the while devoting our minds to other concerns. Ananias and Sapphira thought they could make it work- they would give to God; they would do the motions and be good, worshipful people and be just a little concerned about their own affairs at the same time. They could bend the rules of worshiping God a little, right? A little white lie to make it look like they were giving their all couldn't hurt just once, could it?

Now a man named Ananias, together with his wife Sapphira, also sold a piece of property. With his wife’s full knowledge he kept back part of the money for himself, but brought the rest and put it at the apostles’ feet.

Then Peter said, “Ananias, how is it that Satan has so filled your heart that you have lied to the Holy Spirit and have kept for yourself some of the money you received for the land? Didn’t it belong to you before it was sold? And after it was sold, wasn’t the money at your disposal? What made you think of doing such a thing? You have not lied just to human beings but to God.”
When Ananias heard this, he fell down and died. And great fear seized all who heard what had happened. Then some young men came forward, wrapped up his body, and carried him out and buried him.
About three hours later his wife came in, not knowing what had happened. Peter asked her, “Tell me, is this the price you and Ananias got for the land?”
“Yes,” she said, “that is the price.”
Peter said to her, “How could you conspire to test the Spirit of the Lord? Listen! The feet of the men who buried your husband are at the door, and they will carry you out also.”
At that moment she fell down at his feet and died. Then the young men came in and, finding her dead, carried her out and buried her beside her husband."  - Acts 4:34b-5:10

We might be able to get away with pushing the speed limits on our roadways or jumping into a forbidden waterfall from time to time with seemingly little effect upon ourselves or others, but be warned: you can't push boundaries with God. Know what He wants of you and do it wholeheartedly- don't think you can slide by, just looking like you love Him.