Diamonds Out of Dust 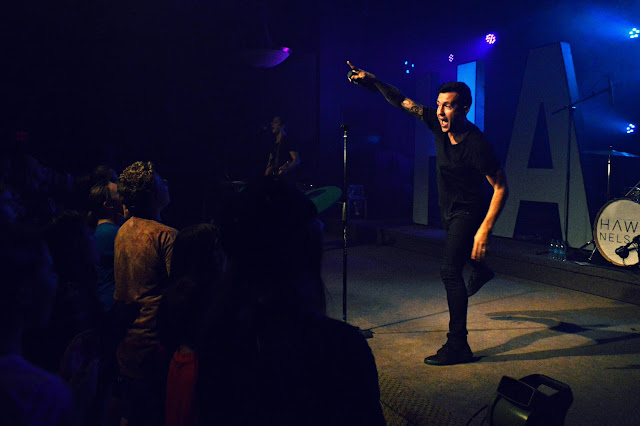 Tip: High ISO's, open apertures, and fast shutter speeds are the key for concert photography. I shot this at ISO 1600, f/4, and 1/320 shutter speed, then lightened and color-balanced it just a tad in post-processing.

This week, Hawk Nelson was nice enough to make a side-stop in my little town on their way to Montana (we are literally on the way to nowhere, so any good concerts that we don't have to drive 2 hours for are a huge privilege for us). It was a great evening with an even greater theme; God's place in hard times.

Some of the evening's musicians had to face some pretty tough times in the last few years. The opening musician (Ryan Stevens) had found out his wife miscarried their twins and that he had been dropped from his record label (which means his greatest income was lost)- both within days of each other. The lead singer of Hawk Nelson (pictured above) had to watch as his little sister suffered from cancer, wondering if she could possibly survive. There were times when all they could do was shout at God, "WHY!?"

A lot of us hit points in our lives like that (or if we haven't, we probably will eventually). Some will get angry and say God doesn't care, or denounce their faith altogether. Some will say through their tears, "God had no part in this. He takes care of the good times, but stuff like this? He could never do that." Those who are familiar with scripture, however, will sooner or later realize that God does indeed have everything to do with our hard times.

Proverbs 16:33 says "The lot is cast into the lap, but its every decision is from the Lord." We also read in the book of Job that all hardship- even that which comes from Satan- is ordained by God:
"And the Lord said to Satan, “Behold, all that he has is in your hand. Only against him do not stretch out your hand.” So Satan went out from the presence of the Lord." (Job 1:12). Through it all though, God's will is accomplished; "And we know that all things work together for good to those who love God, to those who are the called according to his purpose. For whom he did foreknow, he also did predestine to be conformed to the image of his Son, that he might be the firstborn among many brethren." (Romans 8:28-29).

As the title track on Hawk Nelson's latest album says, "He is making diamonds out of dust, He is refining and in His timing, He's making diamonds out of us." - in other words, God is conforming us to His image; He is taking us in our worthless state and forming us into something of value to Him. This is what happens to those whom He has saved. Like making diamonds, it's a tough process, but it will be worth it in the end when we are able to be worshiping in His presence. Trust Him.
Posted by Sarah at 9:00 AM